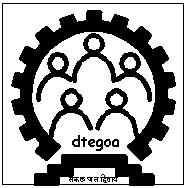 GCET exam is conducted in three subjects viz. Physics, Chemistry, and Mathematics. Candidates who are interested in B.Pahrm. courses are not required to appear for the Mathematics paper. Each section comprises of 75 multiple choice questions from the syllabus prescribed by the Directorate of Technical Education, Goa. The syllabus is as per the topics of the class XII syllabus of the Goa Board of Secondary & Higher Secondary Education. Let’s check out the detailed GCET 2022 syllabus for all three sections.

Conductors and insulators - free charges and bound charges inside a conductor. Dielectrics and electric polarization, the combination of capacitors in series and in parallel, capacitors and capacitance, the capacitance of a parallel plate capacitor with and without dielectric medium between the plates, energy stored in a capacitor, Van de Graaff generator.

The internal resistance of a cell, potential difference, and emf of a cell, combination of cells in series and parallel. Kirchhoff ’s laws and simple applications. Wheatstone bridge, metre bridge.

Potentiometer – principle, and applications to measure potential difference, principles for comparing emf of two cells; measurement of internal resistance of a cell.

Refraction and dispersion of light through a prism.

Scattering of light – the blue color of the sky and reddish appearance of the sun at sunrise and sunset.

Microscopes and astronomical telescopes (refracting and reflecting) and their magnifying powers.

Proof of laws of reflection and refraction using Huygens’ principle.

Diffraction due to a single slit, width of central maximum.

Mass- mass defect; energy relation, the binding energy per nucleon and its variation with mass number; nuclear fission and fusion.

Elements of a communication system (block diagram only); bandwidth of transmission medium, the bandwidth of signals (speech, TV and digital data). Propagation of electromagnetic waves in the atmosphere, sky, and space wave propagation. Need for modulation. Production and detection of an amplitude-modulated wave.

UNIT VI: GENERAL PRINCIPLES AND PROCESSES OF ISOLATION OF ELEMENTS

UNIT I: RELATIONS AND FUNCTIONS

Keep a check on the official 2022 notification for changes in the GCET 2022 syllabus, if any.